What do you want to be when you grow up? It’s a question we all ask our kids, but then often steer them in a more promising direction if their answer is “an artist,” “a rock star,” or “a race car driver.” But when Lynn Freese’s little boy said he wanted to be a baseball player, her only response was to “Go for it.” Her support over the past twenty years or so has led him to become one of the biggest names in the game.

“I never even really liked baseball,” Lynn jokes. The Detroit native grew up on hockey and football.  She met St. Louisan and SIU-Carbondale graduate Guy Freese on a blind date while he was working there, married him and moved to Texas for Guy’s job, where they started a family. When daughter Pam was six and David was four, they returned to Missouri. Lynn was a busy stay-at-home mom.

“Pam played volleyball and basketball, and Guy coached David’s baseball team,” said Lynn. “When David was eight, he started playing select ball, and eventually played year round.  We were always traveling with the team, and when Guy was traveling with his job, it was up to me to get them to games and practices.”

Finally when the kids were in high school, she decided it was time to have a career of her own. At 42, because of her love for reading, she earned her degree in Language Arts Education and started teaching seventh grade at LaSalle Springs Middle School in Wildwood.

“The kids at that age have a great sense of humor,” said Lynn. “I’ll never forget the time a student had written a serious story about a massacre, but spell check kept picking it up as ‘mascara.’ It changed the whole story and had the whole class laughing.”

She loved her job as a teacher, but as a parent, those years could have been stressful. While attending college at Southeastern, Pam changed her major four or five times, and in David’s senior year of high school, he made the shocking announcement that he would not be playing college baseball. But instead of stepping in, Lynn stepped back. 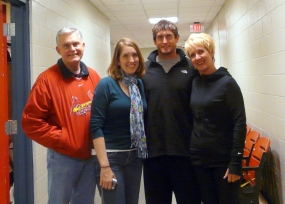 “Those were not my decisions to make,” said Lynn. “David was burnt out, and Pam was trying to figure out what she wanted to do with her life. All I could do was pray that they made the right choices for themselves.”

As it turns out, trusting in her kids, and God, resulted in perfect outcomes. Pam graduated with a degree in Early Childhood, and after enjoying a year of fraternity life at Mizzou, David started playing ball again at Meramec Community College. He was later drafted into the Minor League and eventually, as any Cardinal fan knows, he landed a spot on his beloved hometown team.

“He’s always been a Cardinal fan,” said Lynn. “He collected all the baseball cards when he was little, and now he’s a part of this wonderful organization. It’s like we’re living in a dream.”

In the past two years, Lynn has enjoyed having David back home, along with Pam and her two children, who call Lynn and Guy “Gaga and Papa Freese.” And while they love to attend games at Busch Stadium, the parents of the Cardinals’ MVP also enjoy watching in the comfort of their own home.

The excitement surrounding David’s success has been contagious to friends and family whom she hasn’t seen in years.  It seems that suddenly her six siblings and 18 cousins from Michigan and Canada – all hockey fans – are now talking baseball.

“I’m really family oriented, and so that’s a big deal for me,” said Lynn. “We’ll all meet up at a game, or hang out in a hotel if he’s playing out of town. It’s so much fun.”

With all the blessings she’s received, Lynn felt compelled to give back. She volunteers at Ronald McDonald House Charities two to three days a week where, among other clerical duties, she helps to ensure that the families are comfortable in their temporary homes as their children await or recover from medical treatment in local hospitals.

“These families have to be so strong for their kids,” said Lynn. “Every night that I walk out of there, I thank God for the joys I’ve been given.”

David also devotes his time by visiting with some of the kids in the hospitals, telling them about obstacles he’s struggled to overcome, including disabling fractures he endured not long after receiving his Cardinal jersey. When one boy, a big fan of David, was awaiting a heart transplant, David surprised him and sat and talked with him for over an hour.

“Hopefully that made his time pass a little more quickly,” said Lynn.

At the young age of 58, there’s not much more Lynn could want. She plans to spend time with her grandchildren, and to travel with Guy, who is also recently retired. This summer, aside from watching lots of baseball, they’re going to Germany and Switzerland.

The only advice from the mom of the boy who accomplished his dream, is not to be selfish when it comes to your children.

“Let your kids experience their lives and live their dreams,” said Lynn. “It’s not your life. All you can do is teach them respect, and to have faith.”